Don't know when it was made.. maybe early to mid 70s? Anyway, it works great.. picture is decent. My TVT loves it. Works like a hot damn.

When it's on, it puts out this smell. It's not a burning/fire smell. It's hard to describe.. it's kinda like one of those unpleasant smells that just bugs you. A 'funk' if you will. Should I be worried about this? Is there anything in these old TVs that can blow up and cause fire? It says 'solid state', so I assume I'm not dealing with vacuum tubes or anything like that. I remember on those old pre-solid state TVs you'd get a bit of a smell as they warmed up.. esp. if they were sitting for a while. I wish you could send smell digitally.. hehe. It's just a really odd, unlikeable smell. Hard to relate to anything specific. But definitely not like, when a safety filter capacitor blows or something overheats.
2

Maybe a bug crawled in and died on a hot component. Open it up, being careful of chillins and wayward beasts, and take a look. Don't leave it opened and unsupervised.

Is it sorta like garlic? If so, don't breathe it, it's toxic. It's caused by a dying selenium rectifier (which could cause a fire). But I'm scratching my head trying to remember if I've ever seen one in a TV.

BTW that auction is classic. "Couldn't pick up any channels." Even someone who doesn't know what they're doing can plug in and do a proper test on something like this, but someone selling a computer can't be bothered. I like the picture. That's a wide screen model.

Plastic and paper can absorb odd smells, and settled dust can contain smelly stuff. Then when heated the smells get released.

A while back I acquired a clone CGA card that had a nasty sort of "smoky warehouse" type smell. Even after washing it, it continued to put off that smell when I ran it. Wound up running it for a couple of days in a ventolated area before the smell sufficiently dissipated. The card worked fine.

So anyway, open it up, inspect the insides, and carefully clean out dust or other debris. You might just need to let it run for a while with some fans and ventilation. Probably a good idea to keep an eye on it just in case there is a component failure.

KC9UDX said:
Is it sorta like garlic? If so, don't breathe it, it's toxic. It's caused by a dying selenium rectifier (which could cause a fire). But I'm scratching my head trying to remember if I've ever seen one in a TV.
Click to expand...

It can't be a selenium rectifier--those went out in TVs in the early 60s--do you recall those IR replacement kits with early cartridge-type silicon rectifiers? This thing is transistorized--way too late for seleniums. The last places that I saw SR's were model train power supplies and battery chargers. In battery chargers, they were actually an upgrade over older copper-oxide (used in multimeters for a long time) rectifiers and Tungar bulbs. I don't remember ever seeing them in auto radio power supplies--those either used a synchronous vibrator or a gas tube (0Z4 or 0Y3). There were silicon rectifier plug-in replacements for those.

Open it up and get the vacuum cleaner on it - the suction hose that is; not the brushes !

...and check for mice and their droppings.

I think I know the smell.
It isn't so much a warm plastic mixed with hot dust and a vaguely sweet sensation. Sometimes it also smells like bakelite if the circuit boards are old enough. The unofficial name is "hot old electronics" but it's otherwise harmless.
F

Yeah it's not a pungent or OMG something's on fire kinda smell. I ran the TV while I was diagnosing a broken wire on my TVT for a good 15 minutes. It seems to have a decent picture and the smell, although unpleasant is not sickening. It doesn't change intensity. It's such a weird scent. It's like if you cooked hand lotion or something.

I suppose I could open it up.. just not keen on it because I worry about brittle plastic and getting zapped again. It's a portable TV and I think they had a battery option... I'd assume the battery wouldn't be internal. That could stink.

Do these things have those X caps that blow up? I just had that happen on my Osborne... now *that* is a nasty spell. I wonder how many potential bombs I have amongst all these old electronics.
I

You lot are UNbeleiveable DUMB not to know the 'ORRECT' answer

its the Black and White TV's electronics working overtime to become a COLOR TV so that it does not get thrown to the eScrapper.

Simply Falter its the smell of hot #eSweat without the blood.
2

Don't laugh. I never got the details, but a guy I worked with a long time ago said some eggheads performed and experiment involving pulse modulation and made a b&w TV display color. I know a lot of details weren't provided, for the simple reason I don't have them. Whatever.

Well, the first color TV broadcasts used monochrome CRTs--cf. CBS system. The color was actually better than the color CRTs of the time.
2

It's been demonstrated how a monochrome CRT with a color wheel gives a better picture than any color display.

It was a case of being too late for the show. Had it been adopted back in the early 40's, it stood a great chance of becoming the de facto system. I happened to be with my mother at Hudson's department store in downtown Detroit sometime in the early 50's. There was a color tv demo setup using the CBS system, and the 'Arthur Godfrey Show' was on. The picture and colors were clear and crisp as I remember, but as a kid, you just knew it wasn't about to happen in your house. My mother summed it up fairly well; "It's nice but expensive, and we already have a tv and no room for two of them in the living room".

My mother's sister, who was fairly well-to-do at that time (my estimation), had the only color tv set in our family back in the mid 60's. It was a RCA console with a good size screen, maybe 21 inches or so. She would call my mother and we would get invited to watch the Jetsons, Flintstones, or maybe Bullwinkle. It was definitely a novelty and kind of like going to a 3-D movie back in the day. I never knew anyone who had the CBS system in their home and never saw one again in the wild.
R

Because of the way a color TV tube works compared to a B&W, the B&W should have a higher resolution and clarity.

Agent Orange said:
It was a case of being too late for the show. Had it been adopted back in the early 40's, it stood a great chance of becoming the de facto system. I happened to be with my mother at Hudson's department store in downtown Detroit sometime in the early 50's. There was a color tv demo setup using the CBS system, and the 'Arthur Godfrey Show' was on. The picture and colors were clear and crisp as I remember, but as a kid, you just knew it wasn't about to happen in your house. My mother summed it up fairly well; "It's nice but expensive, and we already have a tv and no room for two of them in the living room".
Click to expand...

The wheels were quite large--I remember seeing wooden crates of them for sale at the local electronics dealer, long after the CBS standard had been abandoned. One for a common 21" tube during the 50s would have been impractical. During about the same time, I remember seeing CBS TV chassis with the (11-pin?) octal connector on the rear for the color adapter. So it's fitting that it went the way of the mirror-viewed televisions of the 1940s (i.e. a low-deflection angle CRT mounted vertically in a cabinet with a mirror mounted on the cabinet lid.)

However, the idea of sequential-field color did manage to make it into the PC age--I recall that most of the video-to-35 mm film slide converters used a monochrome CRT with a small color wheel. A shadow-mask CRT of 1" or so would have been impractically coarse.
A

Here's the best image I'm aware of which demonstrates the issue with using a color wheel: 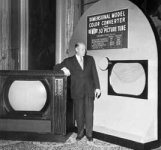 (unfortunately, I'm not aware of a larger version of said image)

That's Allen B. Dumont standing between an example of his company's mighty Royal Sovereign television set, and a 'dimensional model' of how large a color wheel would have to be in order to work properly with its 30" CRT (AFAIK, the largest direct-view television CRT until well into the color era). CBS countered with a prototype of a 17" CRT set using a color drum instead of a wheel (visible halfway down this page) which is much more reasonable in size. I believe they were also working on fully electronic sets which worked on the field sequential principle, but the signal wouldn't have been compatible with regular black & white sets of the day, which was the system's downfall (along with RCA's industry clout, anyway).
-Adam

The other notable things about the field-sequential system was that flicker was quite noticeable for most viewers, although CBS proposed raising the field rate. Early color CRTs were pretty awful; most notably in the reds, which were dim and relatively long persistence compared to the other phosphors. The "oddball" frequencies for NTSC (59.94Hz vertical and 15.734 Khz for horizontal were "adjustments" made for the RCA color standard to the pre-RCA standard of 60Hz and 15.75KHz).

A historical note here is that "General" David Sarnoff played his usual crooked game of influence peddling with the FCC, resulting in manufacture of color sets being banned from 1951-53, ostensibly because of the Korean war, although it was hard to see what that had to do with the issue. When the FCC again allowed for color TV, it adopted RCA's standard, thereby freezing out CBS. Similar shenanigans were used by Sarnoff in the postwar days to simply steal Edwin Armstrong's FM sound broadcasting method--and to completely dismantle his pre-war FM "Yankee" radio network by changing frequency allocations.

The story of postwar TV was not a pretty one.

TV has come a long way since the early rabbit ears days. My grandmother, who lived nearby in Toledo, finally got a new Sylvania 17 inch set around the early 50's. I was made a gift of her '48 Hallicrafter 'portable' tabletop tv. It had push button tuning for channels 2 thru 13 along with a 7 inch screen. This came with a 'bubble' contraption which slid in and out on a pair of rods under the front of the set. The bubble was filled with some kind of liquid and you could magnify the presentation to about 10 inches or so. I had the thing in my room until I went into the Navy in 1957.

If one couldn't afford a color tv back then, and that would be just about every household in my neighborhood, you could purchase a 'color adapter' of sorts that installed much like the bubble. The top of the thing was blue and the bottom was green with some yellow in the middle. If you're old enough to remember, these were advertised on the local tv stations along with some waterless aluminum cookware and a deck of 'shaved' playing cards where every other card was the ace of spades. 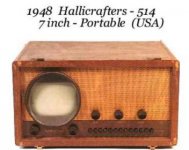