I am about to restore a Vector Graphic 1++ that can hold two internal floppy drives that I do not have. They are supposed to be Shugart SA400 compatible (as the manual states) and I believe the controller calls for the floppy drives to use 16 sector hard sector floppies. The power connectors for the floppy drives, however, are not what I am familiar with. The manual also talks about a "mini-floppy power supply P.C. board". Would I be correct in thinking I can't just replace the connectors with a normal floppy power connector and run it?

Here's a pic of the connector I am speaking of: 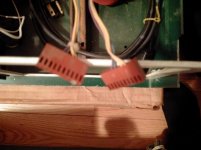 Any help is much appreciated.

I think those were for Micropolis drives, which have a pinout close to, but not exactly matching an SA400.

Yes, those are the Micropolis drive power connectors. The dives are single sided and were used with 16 hard sectored floppies. You'll find "Mod-I" or "Mod-II" within the model number on the drive. Mod-I is 35 tracks at 48tpi, and Mod-II is 77 tracks at 100tpi.

The mini power supply board provides regulated 5v and 12v for the drive from the computer's main supply. I assume that regulator board is on the other end of that power harness you pictured, or are there just bare wires at the other end?

The key to your next step is what type of floppy controller is in the system. Sounds like it may be the Micropolis FDC (or the Vector branded version of the Micropolis FDC). Post a picture of the FDC when you can.

Thanks guys. I hadn't taken the cards out yet because I was going to order floppy drives, if needed, and then clean it up but that was a Doh! moment The controller would tell me more. I thought I'd look at the manual first but it says Shugart SA400 drives. I'm pretty sure it's the right manual along with a few other goodies including Micropolis documentation 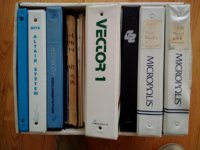 That said, you guys are right. They floppy controller is Micropolis. 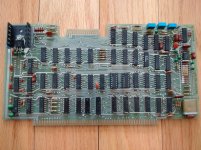 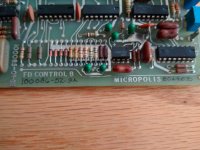 I do have a couple of Micropolis dual drive enclosures with drives so I'll see what they are. The connection for the floppy power cables goes to the big cap and some voltage regulators so this looks okay: 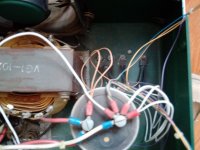 Oddly enough, this came with an IMSAI CPU board installed. 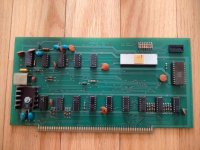 The manual says it should be a Z-80 board but I don't think I have that. I do have an loose IMS Z-80 board though. Interesting machine so far. It does have a lot of cards in it but I'll explore those further a little later. Sadly, the fan got broken in transit so I need to find a replacement.

I should look in the manual in case the previous owner included the Vector Micropolis documentation.
D

Looks like the controller is strapped at the standard address of 0xF800. It has the jumper in place near the top left corner of the board that tells disk driver software that the CPU is running at 4mhz. This jumper is used by software so timing loops are correct for 4mhz vs 2mhz processors. I'm curious - look closely at your 8085 CPU board, can you determine its clock speed?

The FDC does not have a very common mod (and later, a standard mod) that turns the drive motor off after a few seconds of inactivity. Instead, the drives will behave more like AC powered 8" drives in which the hub motor turns all the time and the head loads and unloads.

MDOS and Lifeboat CP/M 2.2 for Micropolis will work on 8080/85 machines. Vector Graphic CP/M 2.2, however, has Z80 specific instructions in the BIOS. I can help you get you up and running with MDOS and CP/M on this machine whenever you're ready.

Thanks Mike. I spent a little time cataloging what's in this system. The IMSAI MPU card is an 8080. I also have a PROM card that has MDOS on it.

Take a look at the following link for some pics of what's in this Vector 1++ (and my clean out handiwork ) http://vintagecomputer.ca/?post_type=computers&p=143

I appreciate the help. Now I have to see what Micropolis drives I have.

In the documentation I have is a document about the VG Monitor that's on the PROM/RAM card. At least I know that it is the "CV" version which is set up for "Bitstreamer Serial in" and "VDM-1 out". I have a couple of I/O cards and now I know what to hook up. I also know the command to jump to the "Extension PROM" which I assume is the MDOS PROM with monitor command "E", I think. 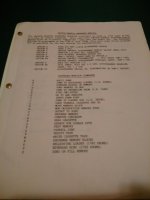 Still haven't powered it up yet but I'd like to read about the cards first and make sure they are configured properly.
D

Looks like the 2nd PROM is actually an MZOS PROM, not MDOS. MZOS was a VG product that they eventually abandoned for the more powerful MDOS (Micropolis DOS) and then CP/M. The MZOS PROM contains the disk I/O routines for MZOS and resides at C400-C7FF.

Thanks Mike. I though that was a typo but I found the MZOS user guide along with MDOS and CP/M manuals. Here's a letter in my Vector manual. Funny how everything sounds revolutionary and then disappears 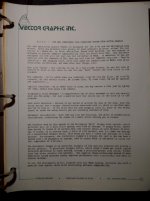 On a related note, I did find an almost identical replacement fan on eBay http://www.ebay.ca/itm/131401338710. Same make and model number; the Rotron Whisper model WR2A1 but the fan hub wasn't green . I didn't realize these were 120 volt fans. Once I get this, I'll install and try to power it up.

I have a 9" Sanyo monitor so I'm probably okat there but I'm not sure what I would use as a keyboard. Do you think my "homebrew keyboard" here would work? http://www.vintage-computer.com/vcforum/showthread.php?46203-8080-single-board-computer My only other parallel keyboard is an IMSAI KBD-1 and I'd like to leave that one alone.

On another related note, I found the Vector Graphic mailing list and am now subscribed. I've started to read through the archives. Haven't read about anyone having a Vector 1 yet.
D

Most VG activity on the list seems to be about the MZ era as opposed to the earlier machines. I have a Vector MZ and a Vector 3. I have a number of Micropolis drives and a few Tandon drives. In fact, I have my Sol-20 running Lifeboat CP/M on two Micropolis Mod-II drives.

I've seen MZOS, but never paid much attention to it until your posts. I find the Northstar DOS to MZOS upgrade path very interesting. I've recently bought a Northstar FDC and some SA-400 drives. My plan is to get Northstar DOS and CP/M running on the Sol-20 with a Northstar controller (a very common configuration) someday soon. Once that is working, it now seems a very logical progression will be to get MZOS running on my MZ. I may need to get a copy of that PROM!

I can read the PROM here, but it may be simpler to write a short program that dumps the PROM out through the serial port. Even on a bare-bones machine, this simple of a program could be typed in with the "P" command of the VG ROM monitor.

Update on my progress:

I finally received my replacement fan and installed it. I fired up the CPU board, PROM/RAM board and Video board and got a rolling * prompt after reseating some chips. It acted like the <center> key was stuck but I had no keyboard attached. I had to install my Bitstreamer board (not connected to anything) to get a * prompt with a single blinking cursor. At this point, I am looking over the Bitstreamer documentation to figure out how the wires/connectors are configured.

I don't have any memory boards or the floppy controller board installed yet but I think it's progress if I should be seeing a * prompt.

I've hooked up a PC with TeraTerm to be able to use a keyboard via serial port through the VG Bitstreamer card. I can type and see the output on the video display connected to the Solid State Music VB1B. I can enter commands through the VG 2.0 monitor (the * prompt) but I can't get MZOS to come up. I think I am supposed to be doing this through the "B" command (Jump to Bootstrap loader) or "E" Jump to Extension PROM at C400 but I see a pattern of characters on screen. I can dump C400 and there is data there until C7FF so it looks like the MZOS PROM is there. 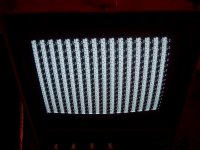 Any help is appreciated. I will reach out the the VG group if there is anyone there with a VG Vector 1.
Last edited: Feb 25, 2015
D

Yes, MZOS is booted with the E command to jump to the MZOS ROM at C400. Do you have an MZOS disk in drive 0 and does the drive come to life when you execute the E command?

Two issues with your question.
1. I don't have a MZOS disk
2. I didn't connect the drives yet.

I figured that with the floppy controller in, it would jump to C400, pull any ROM required information from the floppy interface and allow me to see a prompt. I guess not. I can hook up the drives (I have an external dual unit for now) but I don't have VG specific disks. I do have a Poly 8813 that uses the same type 16 sector disks, if I recall correctly, so I can put a disk in, at the very least, but I don't have any Vector 1++ software at all on floppy.

I'll do my best to hook up the external Micropolis dual drive tonight and see if it makes a difference.
D

Without a MZOS disk, you won't get much further, but at least you can see if it attempts to boot from the drive. I can create an MZOS disk from a disk image if you want, or let's get the MZOS PROM dumped and I can try to get it working here first, if you'd like.

I prefer you try it on your set up because you are familiar with it and have known good memory. My only issue is that when I hook up a PC with Teraterm, I am only able to utilize keyboard; I don't see any output on screen. I can dump C400 - C4FF in hex to my video display but nothing ever shows up on my PC screen. If I could get PC screen output, I could copy/paste the hex code and send it. Am I not seeing output on the PC because of my set Solid State Music video card? I don't think I can make changes to the configuration because my monitor is set for it as is.

Any help is appreciated.
D

In the monitor, use the "P"rogram command at address zero to type in the following program:

Start a log file in TeraTerm under File->Log. Enter a file name (e.g. MZOS.BIN), check the "Binary" box, uncheck the "Append" box and click "Save." You'll notice a new tile shows up on your taskbar for the log task.

In the monitor, type "G"oto 0000 to dump the ROM out the serial port. It will be done in a split second and halt the machine.

Click on the log task tile on the task bar to restore the dialog box and click the "Close" button (NOT right click and close). That should give us a .bin file (with command garbage at the beginning). Email it to me at (spam reduction): deramp5113 followed by ASCII 0x40 followed by the yahoo domain name.

Reset your machine to get control back.