This is the same system old_68k had available last week for free. Took a road trip and because I have local knowledge on these systems saved it from oblivion.

It's going to live outside for a few more days while its quarantined and slowly cleaned but the machine seems to be fairly upgraded. It was originally an IV/70 but has been upgraded to an IV/90 by a board swap and an expansion cabinet that contains more memory and the new CPU. There is an additional expansion cabinet that was included that has a disk controller and the system also came with a line printer board and a tape interface board, plus a Wangco 502-037-115 tape formatter. Along with the Power Distribution Unit and some rack blanking plates there was also a substantial amount of cabling included that I can tell all goes to this machine and there's nothing major missing from the machine beyond two ram chips on one of the many display memory boards that look like they fell out. I might be able to find replacements as compared to every other IC in here, these are by far the most common.

What I do not have however is a terminal. From what I have been educated on so far it's not ASCII or current loop but something weirder where the video circuitry all lives in the computer and is sent out via coax in an unknown video format and the keyboards send data back on a digital pair during the blanking interval. Asking around very quickly I was able to uncover a keyboard, so I at least have the "hard" part. Other terminal options are listed in the brochure over at the CHM's website Which seems to hint that somehow an ASR33 option was available in some form.

Other than one website and a few pieces of documentation on bitsavers there's nothing. As I start cleaning the machine up I would like to photograph everything for safekeeping so expect this thread to expand as I dump in photos and try to get a bit of life out of the machine. @Al Kossow if you want high-resolution photos right now is your chance but I'd like to know what your preferred image resolution, format and detail requirements are if you want me to bundle something up for you.

Work started this weekend dismantling the main chassis for cleaning and photographing. There's a lot of dirt and cobwebs.

No signs of animal damage, the capacitors on the power supply have all tested and reformed okay and the only real damage so far is broken pins on the keyboard alarm cables, six front panel bulbs are burned out (7387, 28v 40ma) and the front panel is missing a pushpin that keeps it in place. More concerning though is that I cannot locate the cabling that connects the terminal mezzanine board to the system and going from other photos online I appear to be missing at least one board from the set that interfaces with it. One of the two slots also has the CPU expander installed. More research is required but I am hoping to have this cabinet cleaned and reassembled by the end of today.

On friday and yesterday I dismantled the terminal keyboard for cleaning and found four broken reed switches and the main IC had one broken pin with two others about to fall off. Quite rusty from poor storage but unrelated to the rest of the system's condition as it came from a separate collection. It however cleaned up.

Currently trying to reach out to MITA for more information as they are the only other place online that seems to have any other hardware information, but the website does not seem to of been updated in quite a few years.
Last edited: Sep 25, 2022

Photographing and cleaning of the main chassis is completed. I have noted a few components are damaged on several boards due to prior mishandling. I have also been told it has been powered on within the last few years so the power supply is presumably still in working order, however before that can be tested the CPU expansion cabinet needs to be gone through. Here's a few samples.

This is currently not a forgotten project. I've been pulling OT at work and with fewer hours int he day I'm getting less and less time in the evening to be running the noisy air compressor. Everything is very dirty and needs to be dismantled and cleaned so better the reason to be photographing everything.
This weekend I cleaned the IV/90 cabinet and the other expansion cabinet which seems to call itself the "NP80". Everything is Intersil PROMs, SRAM and bitslice processors. The NP80 is its own computer it seems,
Both cabinets have simpler power supplies so I cleaned, cap tested and load tested both with no issues and late this evening I felt bold enough to put the cleaned boards back in and throw the switch.

The control panel is responsive. If I flip up the three CIL switches and hit RESET the halt light goes out and I get blinkenlites, so it's doing something and it's not halting for any sort of an error that I can tell which is extremely promising.

Cataloging is going well. We are currently at over 150 images and about 80% completed.

They keyboard is kind of interesting--the shfit-F is labeled 0-8-2, which is card code for a record mark.

It seems that they had a number of customizable layouts that you could order rather than paper/plastic overlays. Data entry was indeed one of their targeted markets.
Related to that, some extra sleuthing found that the Card Reader option is in fact an interface for Documation readers. Man everyone at one point or another used one of those as a low-cost reader.

At this time the NP80 and the tape formatter have come up and passed the smoke test. I'll try and get the IV/90 to pass a smoke tst next as I know its power supply is good and then I need to figure out how to do the IV/70 as it has a heck of a lot more voltage rails.

What character set does this thing use? EBCDIC? I see characters on that keyboard that are not standard ASCII of the time. But they are EBCDIC.

A brochure from the CHM archives says it supports all characters and symbols for ASCII/EBCDIC 2260 and 2265. They also advertise this as an end-point system for customers connecting to a central 360/370 system through 2260/2848 emulation and the 2701 Synchronous interface.

Ah, so the character set is a little of both ASCII and EBCDIC--that explains it. Your keyboard with its 0-8-2 key has me wondering what the original application was.

The IV/90 passed smoke testing and didn't seem to immediately light any of the clearly marked fault lights, which is promising. Left both cabinets to run for a while as a burn-in.

Finally I tried the IV/70 without the enclosures attached. It powered up and got a static but non-functional front panel (which was expected as the IV/90 was not connected) however after about a minute there was an incredible bang and bits of paper blew out the back as the basement was overwhelmed by the smell of canned tuna. This is why I like using a foot pedal as a safety switch.
I had already gone over the power supply so I was a bit confused what happened there. Turned out it was one of the multiple poor looking Sprague capacitors on a memory board had exploded, so the power supply is probably fine. 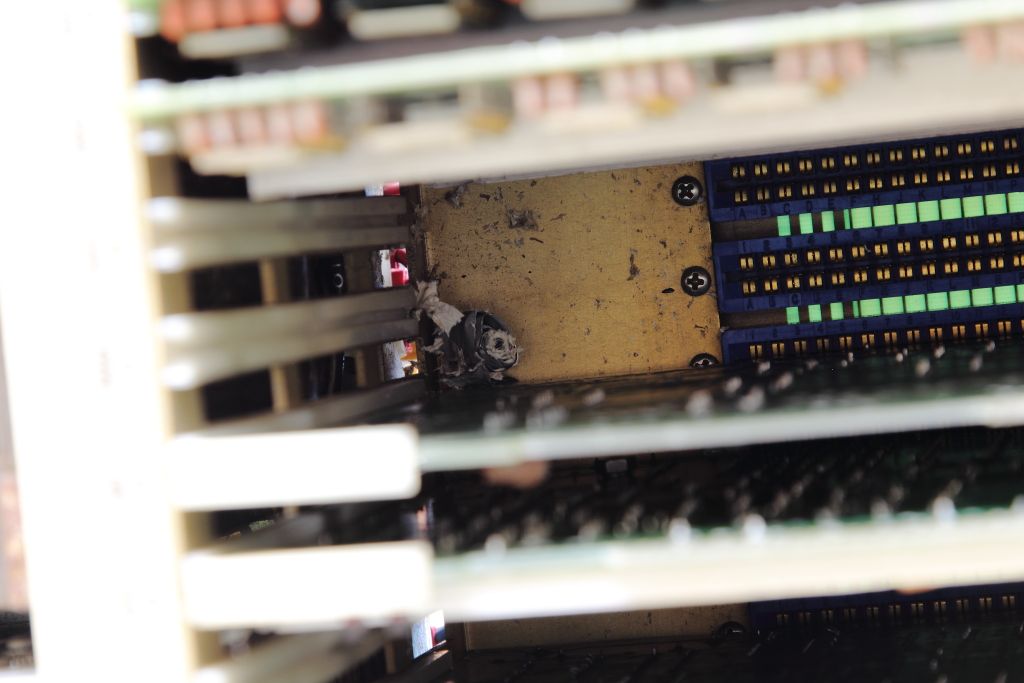 I already went over everything looking for low resistance or shorted components and other than a crushed IC found nothing, so this simply couldn't handle waking up. I'll need to re-evaluate the other caps now.

Further testing has found that many of the 50v 50uf axials on the memory boards are failing. After pulling them all I found all but five were reading between 2000 and 3500 picofarads. I'll have to go back over everything again.

Wet electrolytics, if they don't short out, usually dry out with age.

Right? I did check for shorts when I got it reassembled but didn't check for capacitance or ESR because the machine was running within the last few years.

Some 48 capacitors will need to be replaced. Just about every Sprague 50uf 50V was either leaky or bad. Everything else tested okay for capacitance and ESR.
There's an LM319N that got crunched that needs to be swapped. Currently DigiKey isn't playing nice with me for that.
There's one diode that got crunched but is somehow still good, but the part number is missing. At least I can measure what it's doing right now.
Lastly for missing board parts I got a transistor that was ripped off. It was in a group with other transistors or components in a similar package and with similar markings but I can't narrow down what the part actually is.

If you can't find LM319 in DIP stocked, try LT319AN - "improved LM319"
The transistor is a house number. You may have to remove one of the intact ones to figure out the parameters. I suspect that it'll likely be something like a 2N2222, but that's a wild guess.
C

Seems like a guy could probably put that transistor back in action with a little careful bending of the legs and a drop of solder...

That one, yes I can fix that with solder but the one two rows back is missing entirely.
Both components seem to identify as N-JFET's

Unfortunately the schematic for this board is not available on bitsavers.