What are the top 10 rarest vintage computer bits you own?

I still have below..

Currently....nothing super rare but this is my collection in order of rarity.....be ready for LOTS of NEC......

1.) Creeping Net 486 - only one like it out there, closest match is DaveJustDave's on Youtube, we have the same case and are both 486s
2.) GEM Computer Products 286 - GEM Computer Products stuff is hard to get since most of it went to US Military installations
3.) NEC Versa M/75 w/ Touch Screen - a convertible tablet/Laptop combo from 1994 with bare finger touch AND Pen support (restoring that screen currently)
4.) NEC Versa P/75 - The last version of the PC-4xx Versa which had a Pentium 75 and SoundBlaster sound, and a WORKING Battery
5.) NEC Ultralite Versa - it's in pieces, has the original "Brick" power adapter, I'm restoring it, these early ones are less common than the above
6.) NES Versa 40EC - Seems the E-series was the most popular of the Versa laptops early on, Caterpillar, Ford, and Microsoft had them for deployment
7.) NEC Ready 9522 - I still see a few on e-bay every year, mine's a Pentium 100 model, the P/75 eats it for lunch though so I use the P/75 more
8.) NEC Versa V/50 - I just got this, I know one other YouTuber with one, Beige-O-Vision, his is a rarer DTSN model, mine's Active Matrix, seen 4 on the bay
9.) Tandy 1000A - despite the high prices everyone has one of these and they're all over E-bay, Clint from LGR, 8-bit Guy, Me, not sure why they're $100+
10.) Apple Macintosh SE FDHD - Commoon, I see these all over E-bay, model M5011, that's why it's #10, more common than the Tandy

But the rarest item I own is actually a piece of medical technology known as a Words+ System 2000 Commpac - it's an AAC (Augmentative Adaptive Communications) device from the company that started with an Auburn University Professor who also worked with Stephen Hawking to develop his speech synthesizer (for all I know Hawking used this actual model in the 90's). It connects to the serial and parallel ports of a computer and uses various pieces of software such as "Talking Screen" or "EZ Keys" to commuincate (which I have them backed up off the M/75's original hard drive and now have them on a newer 80GB drive). This thing looks like it was a prototype - the casing is epoxied together out of black haircell ABS plastic, parts of it look like a custom-mod job to velcro it to the NEC Versa M/75 it was attached to, it had a modified Socket I/O Serial card on it (which I removed and now it uses the Versa Dock directly, and far more reliably I might add). All I have is the unit though, I took out the rotted battery, wired it up for a 9V AC adaptor, no switches, no IR proximity/movement sensors, just straight up keyboard input for now. It's actually come in handy as a musician to record computer voices with Auto Tune and it sounds really cool or really funny depending on what the musical scenario calls for.
Last edited: Feb 11, 2021
C

Not too rare but I’ve got

I don’t think I’ve got anything that’s super rare. And I’m not really sure I want anything that so rare I’d be upset if it broke and I couldn’t get parts for it.

I’ve got a couple of IBM 5161, but no cables or extender cards, just the receivers.
I’ve also got the lid for a Compaq Deskpro 386, but it’s not the correct computer underneath
T

How could I forget. I have 2 Mindsets, one beaten to snot. Neither work lol.

I also have a Tecmar 5161 clone, in horrible shape. Jafir reminded me.
T

Weiveismart said:
How about a Durango F85?
Click to expand...

is that a "Poppy"? If so you'd better erase that post before Chuck G.finds out.
F

tipc said:
How could I forget. I have 2 Mindsets, one beaten to snot. Neither work lol.

I also have a Tecmar 5161 clone, in horrible shape. Jafir reminded me.
Click to expand...

Do they power up to a black or solid colour screen? That's what both of mine do.
T

Haven't powered them in years. Couldn't tell you. I just cringe to think I nearly gave ~1/2 dozen away years ago.

And I won't be powering them again using the stock power supplies. Not until I can load test and verify their integrity.
L

Hi, I have original 1975 Altair 8800 kit documentation including build manual, operations manual, original parts lists, original cassettes for 4K and 8K BASIC as well as StarTrek and a lot of other stuff from when I built my Altair 8800 kit.

I place here my rarest items, in no particular order. Sorry if some of them are not that rare.

Well, sure it's not that rare but I'm feel quite lucky I found, not too far from my home, a mint condition one, perfectly working, at a not-that-crazy-price. I also feel that the 8086 model is more difficult to find than the 286 one, not sure this is right.

This is a Turbo XT clone with a Siemens 8088 dual speed inside (4.77-10 mhz) and a dual graphic card (Herc + CGA? The computer came with an MDA type monitor, so now it works on Herc mode). It has a Zeta Ltd. BIOS from 1989 (first time I heard of) which looks to be 100% compatible with the IBM BIOS, as it ran every program I tried. I wasn't able to find any information of this system on the web so while the configuration is quite common and standard, with almost the same specifications as DTK Turbo XT and other clones, this concrete model and mark I think is quite rare.

This time, a book. The 1987 edition. It still can be found on Ebay and others but there aren't that many physical copies available... I think this is considered as the "bible" of 1980's IBM and compatibles video systems. Very revealing and useful. While Abrash's books are more detailed regarding VGA, this book is the one for treating earlier video cards.

This book has being with me more than 30 years. I think it's quite rare, not many copies were produced at the time, and there are not many available on the web. It's not bad but it's quite simple comparing it with the superbly detailed and useful Wilton's one. I'd wish I had Wilton's book instead of this at that time...
C

My two most rare machines would be my Xerox Alto and Xerox 1100 (aka Dolphin, aka D0). The Alto is widelyconsidered to be the first personalcomputer with bitmapped display and mouse. Only about 2000 were ever made. Probably fewer than a dozen still exist and probably fewer than that still work.

The D0 is even more rare. It was designed as a transition machine from the Alto to the Dandelion that ran Xerox's Star office system. Maybe a few hundred were made and I only know of one other one still working. 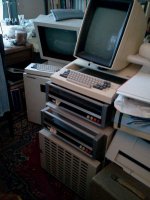 Probably the rarest computer I own is a Canon navigator HD40, it has a phone, printer, fax, touchscreen, ibm pc compatible, all built in to the same chassis, in1990! I got it with all of the goodies, keyboard, mouse, weird plastic cable management cover (that bit of plastic is probably the single rarest thing in my collection, I haven't seen them anywhere else) only thing that's missing would be the external printer, though there's still the internal thermal printer.