mbbrutman - that is SWEEEEEET! I got to go up in one of those low-wing Pipers once and it was one of the greatest experiences of my life!
C

Kaypro said:
hehe, that engine does indeed look impressive, next to the 2.3L Slant-4 in my car...

Another funny story about volvo; When they released the Volvo 960 it spotted a brand new I6 engine. When people wanted something with better mileage than the I6 but more power than the I4:s they simply cut off one cylinder and the famous Volvo I5 was born (used in the 850 series and many other models). A few years back they announced a new I6 engine, with roots in the I5....

dongfeng: A dolly sprint! I recently watched the top gear episode where they tried to find good cars made by british leyland. The sprint did get my attention even though it didn't win.

nymetropolitans said:
mbbrutman - that is SWEEEEEET! I got to go up in one of those low-wing Pipers once and it was one of the greatest experiences of my life!
Click to expand...

Didn't we already have this thread?
http://www.vintage-computer.com/vcforum/showthread.php?t=2926
T

EvanK said:
Didn't we already have this thread?
http://www.vintage-computer.com/vcforum/showthread.php?t=2926
Click to expand...

Not all of us, we've acquired a few new members in the past couple of years.

That other thread pretty much deteriorated into a "My Z-28 is more machoer than your girlie-ass Mach 1" screaming match anyways, so it's prob'ly better left buried.

See ? Just goes to show that multithreading is possible even in vintage computing.
patscc
Y

Was just thinking about my new car, and realized ya'll don't know about it or my last one.

About a month ago I traded the dumpy old S10 off for a nice 1990 Chevrolet Suburban 1500 Silverado. Best trade I ever made. Looks rough, but has A/C, a nice interior, custom center console, and seats 8. Damn comfortable seats, too. 176,000 miles, runs like new. This is my 3rd vehicle. V8 350, power everything.

Well I'm not the kind of man to pass up a good deal(I find it impossible, as a matter of fact) and Saturday came across a 1992 Dodge Dynasty for $500. 14,642 miles, looks brand new. Velour seating, very comfy. Cruise control, nice system, looks great inside and out. Seats 6, has child locks(not necessary at this time in my life), and power everything. Except, I swear the brakes are manual, or minimal assist. Drives like it's brand new(Hell, barely broken in!) has a 3.3l V6 and automatic transmission. Maintenance records for the last few years, new tires, new brakes, new oil, only thing it needed was exhaust work. Replaced the pipe from the catalytic converter all the way back, including the muffler. Didn't have a resonator installed though, it's quiet enough and those just hold water and rust away.

So now I have to sell the Suburban ($1000 OBO), but it had a good month of driving with me. Actually, not even that yet.

Looks like you got a bargain there, but ... did Dodge have to pay extra for a cad package with CURVES in it? Even the clock's square!
Y

LOL! Does the steering wheel count?

Nice car, but it won't haul as many puters as the 'burb did.

BTW, check the brake power booster. Sit in the car and with the engine off, pump the brake pedal a few times to bleed off any air trapped in the vacuum lines. Hold the pedal down the last time and start the engine. The pedal should drop about an inch as the engine starts. If it doesn't drop, repair/replace the vacuum booster unit.

I'm also waiting for a Fantic 50 (not sure about year/model) trial bike.

I also drive a Fiat Panda, but that's not a great or vintage car at all :mrgreen:
D

This is a great thread, interesting to read about so many American cars I've never even heard of before :lol:

I have a new car too

My 1978 Dolomite Sprint (see page 5) dropped a valve (the cam-to-pulley bolts snapped ), so is in need of a complete engine rebuild. Bit of a pain, as the engine only had 10K on it...

Luckily I came across a 1980 Triumph Dolomite 1500HL Automatic in Brooklands Green :D

Had one owner from 1980 to 2000, and is totally original and unrestored with 70K on the clock. The previous owner drove it on the "Round Britain Reliability Run" (2000 miles in 2 days). It also has a brand new engine.

I'm going to fit the correct wheels (has early ones on it at the moment) and repaint the roof as the paint is thin.

It was also registered 3 months after production ended in August 1980, so it's gotta be one of the last ones built!

It's also quite rare - according to the owners club there are less than 40 1500HL Autos registered on the road in the UK
Last edited: May 7, 2009
Y

TandyMan tried to make a new car thread, but being shot down, I will instead ressurect this one. 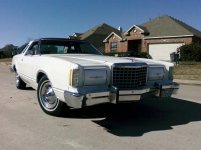 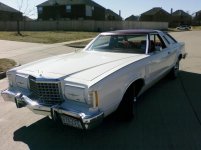 My transportation has changed a lot in a year!

89 Toyota MR2 - Fresh from the body shop. Entire body has been customized in some way. Custom red paint blend with red and gold flake. Every inch of this car has been changed! Specs on that one here http://www.cardomain.com/id/aaron7

64 Honda CA95 'Baby Dream' - Stripped to the bare frame and restore-modded. Fender isn't mounted in the pic yet.

Location
At my computer

chuckcmagee said:
Merl, how does it do being hit by a city bus? as in fortified cage, side air bags, that kind of stuff?

It is a good looking van, grant you that one.

I love my 2006 Toyota Sienna van. From the day I got it, it was obvious that they used their vast delivery truck making experience in the construction and design. You can tell it's a truck chassis with a van shell on top V6, tons o' power, 25.5 mpg (which I can't believe, that's better than I get with the 1997 Mazda Protege with 2 liter motor).
Click to expand...


I rented one of those once, *really* nice rides, though I had a hell of a time figuring out how to load the CD player. Suprised the heck out of me when the pedal was crushed power to spare in those.
K

Right now, or in total? 'cause I don't think people are going to appreciate me if I post the list. It's long.

Right now, I have a 1982 Toyota Supra, a 1977 Toyota Celica (Yes, the ones that look like old Mustangs) and a 1988 Toyota Corolla All-Trac Wagon (Full time four wheel drive, locking center differential, and a 1.6L DOHC, fuel-injected four-cylinder. It is a monster in the snow.)

I like my Toyotas. I've owned a silly number of Celicas and Supras.
M The Off-road Rig is a modified 1992 Ford explorer.. and of course, the workhorse around the property.. (fix driveway etc).
1940 Farmall H. We also have a pair of motorcycles (Kawasaki zx-6 and ninja 500) which I'm sad to say haven't been ridden in over a year..

I've been a bit of a VW nut for quite a while. Over the past 25 years I've had more than 30, including a 57 oval window bug, a 55 Convertible that had a tree growing through it when I bought it, 70 Westfalia Camper, 67 Singlecab, Barris sand buggy. and 85 Wolfsburg Edition Golf Convertible. But I have always wanted but never owned a Karmann Ghia so if anyone knows where one is (preferably very cheap)....
W

nice looking truck. you should have posted them pictures on the dodge forum after you completed the body swap. those rims look way better in black than the grey they use to be.
I own a 91 dodge d150 shortbox with a carburated 318 with a 727 transmition and 3.55 gears. the engine has a RV cam in it for increased low end torque and better fuel efficiency on the high way. it gets between 18-25mpg.
i also have alot of bicycle that i ride daily because they are free.
You must log in or register to reply here.
Share:
Facebook Twitter Reddit Pinterest Tumblr WhatsApp Email Share Link
Top